Yes, Belgium is not renowned for its size, but is known for the quality of its attractions… Brussels, the Capital of Belgium, is one of those fabulous cities where an indescribable amount of activities are happening every day. Culturally, Brussels is a very open city and all nationalities are represented here, but at the same time a unique home-grown culture is deeply incrusted. Travels to Brussels are easily reached on the western side of Europe, and eastern European countries are also accessible because of its central location.

France has had a big influence on the history of Brussels which explains why French is the first language of the city. The population of Brussels is good with languages and you can find people who are fluent in French, Dutch, and English. This guarantees that integration into the city’s activities will be easy during vacation. The famous statue Manneken Pis is an example showing the degree Dutch and French multiculturalism exists in Brussels.

It is located close to the Grand Place, another important sight to visit in Brussels,   holding a place on the World Heritage list of UNESCO. Every two years in August the Grand Place unfolds an enormous carpet made of flowers which attracts tourists from around the world. The Town Hall, King’s House and Guildhalls can also be seen in this charming area of Brussels. 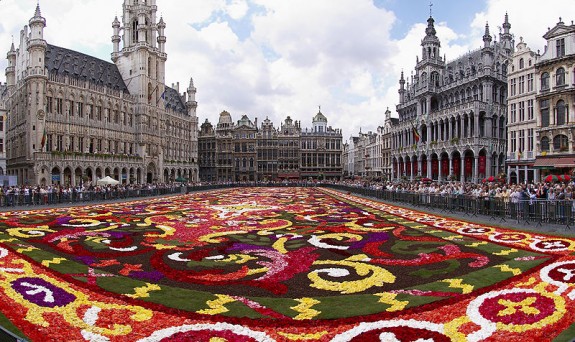 The Royal Palace of Brussels is a must for visitors, as it is a large and truly amazing site. A wonderful promenade is also available in the lovely public park which faces the Palace.

The Cinquantenaire is a park that not only possesses monuments of grandeur like the Triumphal Arc, but close by are interesting museums — the Military museum, Aviation museum, Art museum and the Auto World museum.

The Atonium, one of the most fascinating sights, is composed of 9 steel spheres all connected together, creating a cell-like shape of pure iron crystal. It stands 335ft (102m) above the ground and from the top a spectacular view of the whole city can be seen. Most of the spheres are accessible via escalators, with souvenir shops and exhibition halls.

Flights to Brussels from London are very affordable, and budget packages can be found from destinations around the world. The Cheapest flights to Brussels can be found at rates as low as £69 ($112) from countries in Europe. Driving to Brussels by car is also easy from England and even easier from Germany. Brussels to Cologne, another touristic city to visit, located in Germany, is only separated by a distance of 112 miles (180km).

Budget travelers will be pleased to know that Brussels has numerous cheap places to stay. Hotel New Galaxy is located only 2 minutes from a subway station, the North Station. Prices here range from 42€ – 60€ ($57 – $82). For a more luxurious sojourn the Royal Windsor Hotel is available. Situated in the heart of Brussels only one step away from the Grand Place, rates start at 160€ ($220).

Belgium has a reputation for having delicious chocolates, amazing fries, and tasty Waffles.  They also have a high standard of kindness toward strangers that invites travelers from around the world to come once, and then come again, to Brussels.