Bucharest, Romania is a city with many recent changes. Jumping in population from 282,000 in the 1900’s to over 2,000,000, it currently abounds with culturally enlightening characteristics. Travelers apprehensive about the climate are needlessly so, since Romania actually has moderate temperatures. During spring, the climate is comfortably warm, with just enough freshness to be agreeable.  Summers are warm without being overly hot, making car hire in Bucharest a pleasant way to tour the city.

The city of Bucharest is a prospering one, and the cultural scene is diverse and growing.  Visual art is very accessible and include many fascinating classic and contemporary Romanian art pieces.  A good place to view these is in the well-established National Museum of Art of Romania. An attractive element in Bucharest is the strong emphasis put on music — the Romanian Athenaeum is one of the most noticeable buildings and it accommodates many outstanding classical music concerts. Classical music is not the only music style which exists in Bucharest. Many Romanians hold a great love for the electric music scene and some electric bands have obtained national, as well as international, fame. Other types of music can also be enjoyed amid the animated nightlife that Bucharest proposes and this can be found in the central district of the city as well as in the historical center. 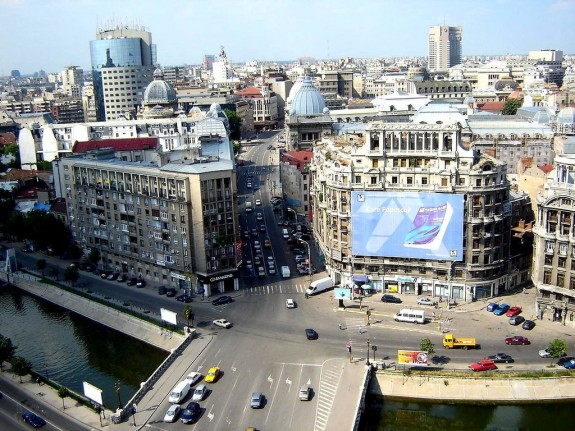 Some of the most visited sites are Lăptăria Enache and La Motoare which are both situated on the rooftop of the National Theatre in Bucharest. Cultural events and festivals are abundant all year round, although the most thriving period is during the summer.  One famous occasion is the Opera Festival which occurs in May and June at the National Opera.

Certain enchanting medieval architecture structures still exist in Bucharest, although several were burned and destroyed during the Communist systematization. The ones remaining can be found in the Lipscani district which was the greatest commercial center of Bucharest in the middle ages. Not far from this district is the old Princely Court constructed by Vlad III, the Impaler, also known as Dracula. This street is renown in Bucharest and remains a charming place to visit. Close to the old Court is yet another interesting place to visit — the Manuc’s Inn. It is the oldest operating hotel building in Bucharest and hosts a popular restaurant, a number of bars, and a coffee-house. Bucharest holidays hold many traveling possibilities. During winter there are Ski resorts that ensure great vacations to all those in search of fun in the snow. Summer travel agencies propose various packages that will guarantee a pleasant retreat. Flights to Bucharest from New York can be found as low priced as $550 for a two- week trip throughout the month of June.

Hotels in Bucharest Romania are countless and provide many different options. If you desire to stay at a budget-priced hotel, there are accommodations such as the Hostel Miramont which is located at only a 5-minute walk from Piata Unirii, the largest square in Bucharest. Prices here range from $17 to $39. For a more deluxe stay there is the 5- star Carol Parc Hotel with rates running from $220 up to $1,100.

The touristic city of Bucharest offers and delivers a perfect vacation opportunity for travelers who wish to visit an important and interesting Eastern European Capital and who will surely leave holding many memorable moments in their hands – valued memories that can be treasured for a lifetime.