Budapest – Hungary is one of those cities that promise its visitors everything needed for a perfect vacation, and then actually keeps that promise!  Budapest travel gives you more in the end than what you expected.  Known to be among the most beautiful capitals in Europe, it has been thoroughly certified by Forbes, a well-known American Media company, that Budapest ranks  7th for the most idyllic places to live in Europe.

There are several grandiose sights in Budapest which are of worldwide fame. The Buda Castle is one of them; this prominent hill castle provides a great tour with historical meaning evident in each room.  Equally impressive, the Parliament building of Budapest, makes another fascinating visit and is the largest parliament in all of Europe with over 18 000 m². It features artifacts from the Royal Family as well as magnificent stained glass and glass mosaic paintings done by famous artists. The parliament can be seen from the Danube Promenade, one more splendid walking visit to take in this city. This promenade unveils many points of interest that will enchant the hearts of all those who love romantic walks and who can appreciate the remarkable sights to be seen at the same time. Another romantic stroll can be taken in the City Park, where there can be seen exquisite trees dating from as early as 1750 surrounded by intricate passageways and lovely scenery, which captivate many visitors. A spectacular monument not to miss is the Heroes’ Square which is located nearby, and displays the symbols for War and Peace, Work and Welfare, and Glory and Honor. 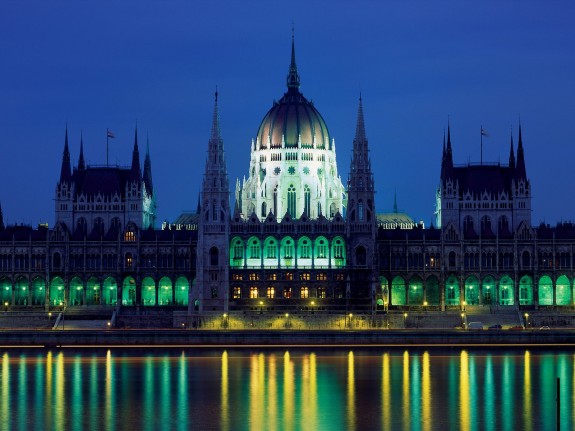 Churches are important in the Hungarian culture; a good example of these impressive constructions is the St. Stephen’s Basilica whose grandeur rivals that of the parliament of Budapest. Hotels in Budapest are very accessible and the city itself provides many possibilities for transportation such as trams, trolleybuses and metro lines which combined make Budapest an easy place to visit. For those who enjoy travel by automobiles, car rental in Budapest is also available.

Cheap hotels in Budapest are abundant but some are surprisingly original and cheap at the same time. The best example is the Botel Fortuna which is a boat hotel offering not only a fabulous romantic atmosphere, but also rates starting from as low as $48. For more luxurious lodgings the Four Seasons Hotel offers mesmerizing nights in delightful accommodations where prices start at $350.

Needless to say, Budapest is a relaxing destination for all travelers who wish to experience calmness and this is rarely surpassed in other locations.  Spas are a perfect representation of this with their soothing qualities greatly appreciated by vacationers. Budapest possesses the greatest underground thermal passageway in the world and one of the largest bathing compounds in Europe called the Széchenyi Medicinal Bath. It also has the advantage of being easily attainable by metro on the yellow M1 line. After an invigorating spa, nothing can be more rewarding that to return to one of Budapest hotels for a restful night. Separately, if each one of the attractions of this city does not seem to be enough, put together they make an unbeatable combination, of not only a wonderful city to visit, but also an extraordinary place to live.

3 Replies to “Budapest: Welcome To A City Where You Will Want To Stay”