Postcards of Oslo can be found throughout the world because the amazing cityscape that exists here is a reality.  Beautiful nature scenes are abounding in Oslo.  Although the city is known for being a place of international business affairs and maintains  a high level of economic stability, immense effort has been put into keeping the city filled with trees, parks, plants and flowers. Weather in Oslo Norway changes depending on the season – winters can be cold with temperatures sometimes going below zero, but summers are enjoyably hot, with many pleasant beaches  not far away.

Oslo is considered the most expensive city in the world – luxury plays a big part in the city and those who appreciate it will find everything they’re looking for here. Shopping streets are abundant as are well-maintained monuments, all seemly new and freshly painted. The medieval styled castle, Akershus Fortress, is exceptional, close to the sea, offering a fantastic view of Norway’s Capital City and the harbor.  The Royal Palace of Oslo is also intriguing with its imposing size and magnificent surrounding park. 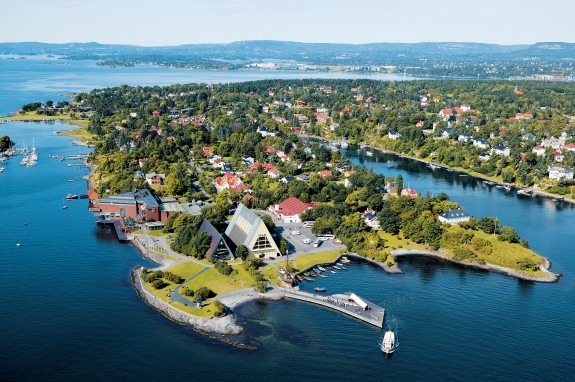 An astonishing place to visit is the new Oslo Opera House – the winner of the 2009 Mies van der Rohe Award — the European Union prize for contemporary architecture. It contains 1000 rooms and is situated both on land sea, with a considerable portion under the sea. Visitors often stand in awe the first time they see it – captivated by the unusual design and extraordinary plan laid out by its builders.

The world famous Nobel Peace Center is a remarkable place where you can learn about the men and women who won the Nobel Peace Prize and the absorbing history of Alfred Nobel. Serving as a meeting place for discussion on war and peace, this Center has films, digital communication and interactive installations, all geared to the resolve of conflict in the world.

There are over twenty theaters in Oslo, with the National Theatre being the largest, holding many spectacular performances. Museums are an added attraction – some have unique displays such as the Vikingskiphuset – dedicated to Vikings – showing their grandiose ships and telling about their mysterious lives.

Oslo Norway travel offers numerous possibilities in the city and the surrounding area. The second largest city in Norway, Bergen, is quite an appealing region to tourists. It has kept a very traditional Norwegian style — with promenades combining sea and mountain— making Bergen a great second destination in Norway.

Accessing Oslo is possible from around the world, although obtaining affordable Oslo flights is easier from European countries. Tickets from London to Oslo can be found at £92.

Hotels in Oslo Norway are generally quite prestigious, but budget accommodations exist. One is the Comfort Hotel Xpress, close to the Nobel Peace Center, where prices start at 580 NOK ($104). For a more luxurious stay, the Continental Hotel, near the National Theater and Frogner Park, guarantees comfortable accommodations starting at 1917 NOK ($344).

Vacations in Oslo, although possibly a little expensive for some, have proven to be in the eyes of many, very well spent considering the treasures uncovered.  The beauties of nature are seen everywhere, and the population is evolving, yet still remembers how precious nature truly is, which is a much needed example for the world.

One Reply to “Elegant, clean and fancily yours, Oslo – Norway”