Prague, capital of the Czech Republic, is a city of much importance in the history of Europe. It once was the capital of the Holy Roman Empire, and played an important role in two world wars. This city possesses distinct and exclusive tourist attractions which are definitely of great value to the European culture. Don’t worry about where to stay in Prague, but rather ponder when you should undertake such an extraordinary trip.

The style emitted by this city is unique, and everywhere the traveler goes he will find exciting places to visit. Certainly the most noticeable example is the Prague Castle which is considered to be the largest castle on earth with an area of about 70000 m². It is classed as a UNESCO World Heritage site and every hour one can see the majestic Change of Guard at the Castle gates. A nearby location is the Old Town where many well- preserved buildings and Churches can be enjoyed.  Inside the Old Town stands a beautiful square with numerous monuments such as the world- famous Astronomical Clock. Further along the square is located the Charles Bridge which crosses the Vltava river and connects with the Prague Castle. This makes for a perfect promenade that will surely thrill any visitor as he breathes in the resplendence of this ancient and glorious epoch.  The Old Town contains the Old New Synagogue which was one of the first gothic structures in Prague. 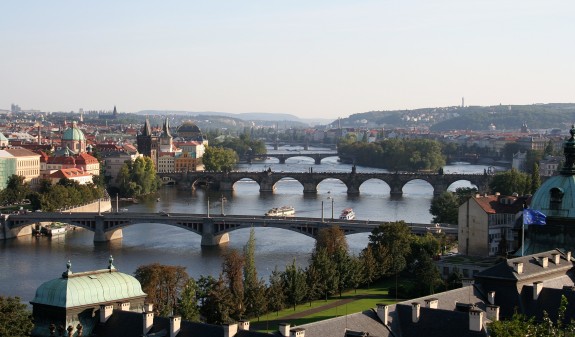 Although there are many captivating older monuments in Prague, there are also exceptional modern sights to see. The Lennon Wall is one manifestations of this modern art. It use to be just another wall but since the 1980s it has been filled with John Lennon enthused graffiti, along with lyrics from the Beatles. Those looking for another spectacular attraction Prague has to offer can visit the Dancing House — a nickname given to an unusual building in the downtown section of Prague. On the roof of this building there is a leading French restaurant, which gives an added incentive for visiting this very uniquely constructed building. The love of art is something engraved upon the hearts of residents of Prague. Museums such as the National Museum of Prague are a formidable part of their culture, and the exhibits one can see in this gigantic building are truly magnificent.

Possibly the easiest way around this city is by car, and Prague car rentals are easier than most travelers would anticipate. Prices range from $26 to $20 depending on the rental length.

There are many luxury hotels in Prague each ensuring a distinguished place to rest. Ceaser Palace Prague is one of these hotels which is located close to the Prague Castle where exclusive rooms are offered beginning at $300. Budget hotels are generally found on the outskirts of town, though exceptions do exist like the Lessertown Hotel which is close to the center. Their rates start at $75.

People who have visited Prague will often relate how this city brought them many pleasant surprises from the start of their visit until the very end. It is a majestic and noble place to visit at least once in a lifetime. They are few cities capable of proposing such striking attractions as Prague does because of the key role it has continually played throughout history.

One Reply to “Prague: A City Filled With History, Mystery, and Beauty”