The enchanting city of Jaipur is located within Rajasthan in India, this oasis showcases a world steeped in history, and the city has been lovingly referred to as the Pink City by many travelers. With temples, fortresses and jewels seeming to spill out of every corner Jaipur offers a feast for the senses, hence let’s hop on over and check out some of the places that simply must make it on your itinerary while on your once-in-a-lifetime trip to the Pink City. A little hint, the city is known as the Pink City because in 1876 the city was painted pink in honor of a visit from the Prince of Wales and the nickname has become a fervent piece of the identity of the city. 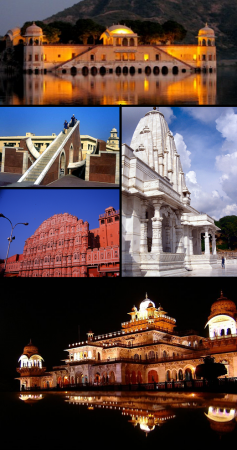 The Amber Fort and Place is definitely worth a stop on your journey through Jaipur, the imposing fortress might have served to protect its inhabitants but step inside and be welcomed to a world of luxury. The Palace of the Mirror is a hall within the fortress, which is fully adorned with mirrors; the aim is so that even the slightest speck of sunlight will serve to glisten along the entire hall. Add to this the fact that the fortress is conveniently located to another attraction of the Maota Lake and this is pretty much a done deal.

Next on your list, but certainly not lesser by any means is Hawa Mahal, translated it is known as The Palace of the Winds. This grandiose building features five floors with 953 windows that serve as a sort of ancient air-conditioning system, oh how technology has saved us all. An interesting fact about this building is that there are no stairs, just slopes that bring the different levels together.

Moving on to something slightly less historically inclined, for those whose family members are lacking in a love affair with the ancient world, we present Jantar Mantar Observatory, this observatory is considered to be one of the largest observatories in the whole world. It is not just an astronomical delight, the architecture is also extremely impressive and it features the largest sundial on the face of the Earth.

No stop to Jaipur would be a complete without a visit to one of the magnificent temples that dot the landscape; Galtaji is a place of great significance for practicing Hindus; however the one of a kind architecture will blow you out of the water. Look over mountains, sacred springs and wildlife from one of the many pavilions.

When in the heart of the city look no further than the City Palace, the functioning palace has a portion that has been transferred into a museum that is open to the public. The museums feature many artifacts from the royal family, including a whole section on the weapons and ammunitions favored by the royal family. While in the city and on the hunt for accommodation within Jaipur that will help you to live the royal experience look no further than Fairmont Jaipur. Now all that’s left to ask is when are you heading over to Jaipur for your touch of wonder?