While speeding through life, there are often times when amidst the mundane pulse of an individual’s routine, you witness a striking scenery. If you’re a connoisseur of beauty, thrive on the unknown earthly pulse of nature, and get inspired by the colossal earthly delights of nature, then Dominica is the place for you. An island country of the Caribbean Sea, Dominica has Guadeloupe to it northwest and Martinique towards its southeast. Being a country as big as 750 square kilometres, Dominica’s highest point is Morne Diablotins, at an altitude of 1,447 meters. 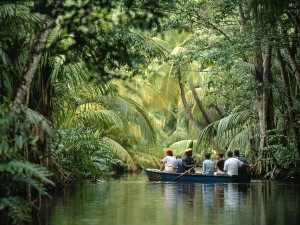 Considered the Nature Isle of the Caribbean, Dominica is the youngest island of the Lesser Antilles, even now under the process of being formed by geothermal-volcanic activity. With rich mountainous rainforests, bubbling waterfalls, and rare species of birds and animals, Dominica is a milestone in real natural beauty. Dominica’s capital and also its largest city, Roseau, is a delight in the colossal list of earthly beauties. Being the oldest and also the most urban settlement of the island, Roseau is situated within the parish of Saint George, encircled by the Caribbean Sea, and towards the west leeward coast of Dominica. The weather of Roseau Island is transitional and ranges from the climate of a tropical rainforest and that of a tropical monsoon. It has a constant temperature all year, which ranges from as high as 29 – 32°C and as low as 19 – 23°C, which makes it a favourable destination for vacationers. Due to the common rainfall experienced by this region, the best time to visit Roseau is during the months of February till April.

Being the historical centre of education, Roseau schools are considered among the best schools of the island. There are a total of six secondary schools, which are situated in the city. And in addition to that, there are also eight primary schools. A community college, called The Dominica State College and a private medical school called the All Saints School of Medicine are also present in Roseau.

Roseau Valley features the villages of Laudat, Wotten Waven, Trafalgar and also Cochrane and Giraudel towards the northern and southern side of the valley. The Roseau Valley is home to one of the World Heritage Sites called the Morne Trois Pitons, which features the most spectacular waterfall at Trafalgar and Middleham. The majestic glory of this waterfall has the power to stun an individual and make him/her quite breathless by its captivating beauty. The valley also features mountainous rainforest, which has thick welcoming foliage, ideal for all those adventure seeking people who enjoy hiking and trekking. There are also many hotels and guesthouses, snuggled amidst the green valley, available for vacationers for as low as € 152. These hotel accommodations not only provide comfort to its guests but also majestic views and efficient service. If you are looking for a vacation where you can explore the natural beauty of our Mother Earth and swim in the fresh salty waters of the lakes, then Dominica Roseau is the place for you.