The story of Warsaw is truly a remarkable one, as it is a city that greatly suffered during the Second World War with over 80% of its buildings being bombarded. This could have been the end of a beautiful city, but a way was found to overcome the destruction and the city was reborn into a marvelous place that exists today. There is an incredible amount of reconstruction that has taken place over the years, and present-day Warsaw travel guarantees many fantastic memories to cherish.

Warsaw’s Old Town was totally reconstructed after the war, and is today a vestige of the old city, possessing an undeniable charm. The restaurants, cafés and souvenir shops located in this part of the city make it a wonderful remembrance of how Warsaw was during the medieval period.  The Royal Castle  can  be seen in the Old Town, accompanied by the renowned Sigismund’s Column which was created in 1644,  one of the oldest monuments in Europe. For a more baroque tour, visit the Wilanów Palace, which is one of the only surviving buildings of both World Wars.  This tour includes a delightful visit to the palace and to the remarkable gardens surrounding it. Warsaw holidays offer two distinct faces — Chilly winters which transform the city into picturesque snowy scenes and comfortable summers that allow for relaxing promenades during agreeable temperatures.

If you hold admiration for Frederic Chopin, you will find in Warsaw many brothers- in-arms, as numerous places are connected to this famous composer’s life and work. This connection is also found in the Holy Cross Church in Warsaw, as it contains the heart of the composer in an urn immured inside a pillar of this magnificent church. 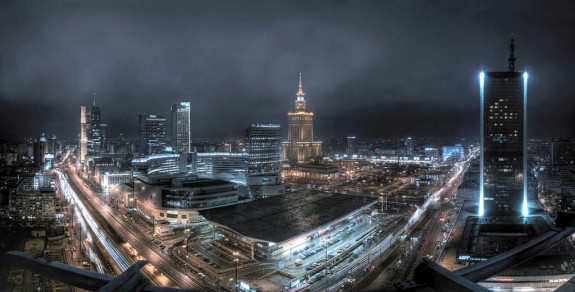 Don’t be surprised when visiting Warsaw to see different mermaid statues, as it is the symbol of Warsaw’s coat of arms. A legend tells of a love story between a mermaid and Griffin, an ancient defender of the city, who died during a struggle against the Swedish in the 17th century. The mermaid, overtaken by revenge and wishing to continue the fight of her loved one, decided to take the place of Griffin as the defender of the city and because of this became the symbol of Warsaw.

If you have always wished to visit this city, it is now more than possible because Warsaw Poland flights can be obtained at interesting rates from around the globe. For summer vacations you can find tickets from New York for $690 or even lower rates at certain times.

Warsaw, Poland hotels are generally quite competitive in prices and even luxurious hotels are affordable. A great budget accommodation in Warsaw is the Atos Hotel located near the Royal Tract, which has easy access to the center of town and also has attractive rates starting at $34. The Sobieski Hotel is a four star hotel situated in the heart of Warsaw, comprising 427 rooms with exquisite layout, and rates starting from $97.

From Mermaids to Chopin, the nicknamed Phoenix City is full of amazements that will enthrall any traveler. Warsaw is the perfect example of how even the utmost destruction can be overcome and one day again harbor the perfect elements for a superb vacation.  “The greater the obstacle the more glory in overcoming it. “ Moliere