Widely known for its banking sanctuary, it is also the center of European Courts of Justice and Auditors, and is the core of the European Investment Bank.  Luxembourg is a scenic city that has kept a unique elegance. Visit Luxembourg with your eyes wide open, because you will be astonished by this cultivated and exquisite city. Luxembourg was in yesteryear a strong fortress, known to be impassable. At one point, the French held the city under siege for seven months, and the durable defense system of the city caused it to earn the nickname “Gibraltar of the north” – Gibraltar was renowned in history for being one the most impenetrable fortresses that existed.

After the Luxembourg Crisis took place (a dispute over the status of Luxembourg in 1867 between France and Prussia) the heavy fortifications of the capital were dismantled. The city had such a strong defense system that it took 16 years for it to be completely demolished. Although the city lost most of its ramparts, it preserved a unique cityscape which combines natural elements and remnants of fortifications. The Old Town is the most conserved part of Luxembourg and has been added to the list of UNESCO World Heritage sites because of its exceptional setting.

There are a number of places to visit in Luxembourg – one of the most remarkable is the Cathedral of Notre Dame, which is built in late gothic architecture, and is noticeable for its two long spiked towers and black roof. It addition, it has a smaller, green spear like tower situated in the middle of the building. The peculiarity of the cathedral is easily noticeable in the city skyline.

The Bock is a natural rocky fortification which was used to position strategic canons and contains an underground passage system. Although most of the fortifications of Luxembourg where destroyed, the Bock has remained an important tourist attraction of the city; the ruins of the passages and galleries ( known as the casemates)  have kept their intrigue and contribute to the unique perspective of Luxembourg’s bygone days when its defenses were comparable to the rock of Gibraltar.  Some canons have been preserved and still convey how very effective the stronghold used to be.

Luxembourg is easily accessible by car from countries like France, Belgium and Germany. For more international travel, flights to Luxembourg propose fares from around the globe – tickets from New York are available with prices around $776. 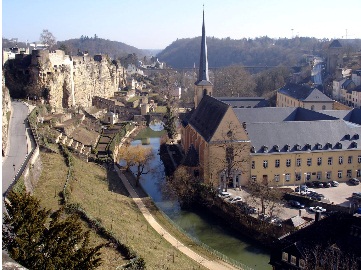 Luxembourg hotels are thriving because of the numerous banking agencies and business centers in the city. Budget tourists or businessmen can both enjoy hotels such as the Hotel Bristol, located close to a train station, and also within walking distance of important city sights. Rates start at 50€. The chic and comfortable Hotel, Le Royal, is a five-star establishment with an ideal location near both the business center and beautiful parks. Prices per night begin at 203€.

Travel to Luxembourg equals traveling to a captivating country with very distinct scenery. Houses and buildings have kept a gothic touch which is exclusive to the country of Luxembourg, as well as the city. Lovely nature scenes, accompanied by fine stone bridges and solid rock foundations – protectors of the past – make Luxembourg an unforgettable destination.