The city of Stockholm, Sweden is a cluster formed out of 14 islands, connected by over 50 bridges, with the actual geographical center of the city amazingly situated on the water. Each island has a story all its own – a unique history, with hidden treasures, and a distinct atmosphere – and time and again visitors are enveloped in a certain magical element which is the Swedish charm.  Stockholm weather is cold in winter with the days being short, while the summers are warm and pleasant and the days are longer.

There are numerous interesting museums in Stockholm which contain incredible pieces of art. The Nordic Museum has exhibits on four separate floors of its majestic, palatial building, and encourages visitors to delve into fascinating aspects of Swedish traditions through viewing its treasured objects.  The building was constructed in 1907 in a captivating Danish renaissance style, and displays Swedish folk costumes, table settings, Swedish folk art as well as images in time of over 500 years  of Swedish culture. 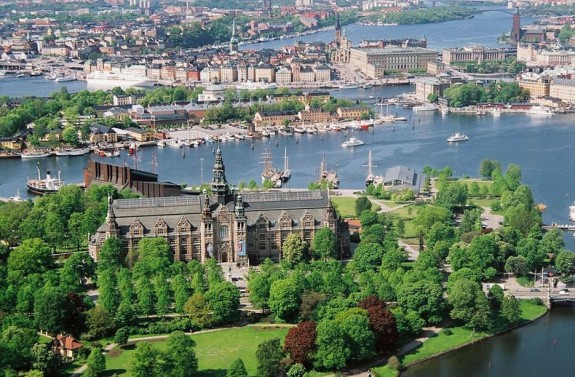 The National Museum is another impressive building, possessing half a million paintings, drawings, porcelain items, sculptures and pieces of modern art. Some of these date back to the middle Ages with collections from prominent figures such as Rembrandt.

The Public Library of Stockholm with its unusual structure often intrigues travelers. What mystery could be hiding inside this bright red circle shaped building? The answer is simple – over 2 million literary works and an equal number of audiovisual compositions – enough to satisfy the needs of any library fan. 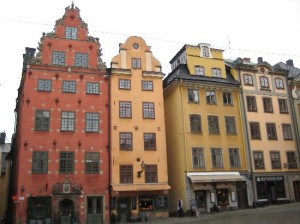 A tour in the Gamla Stan (Old Town) reveals much about Stockholm’s past. The ancient streets, houses, monuments, and small alleys are all that is necessary for a wonderful trip into bygone times. The enormous, rectangular Stockholm Palace is connected to the Old Town and is one of the largest palaces in the world still in use for its original purpose.  In contrast to this immensity, one might want to try out the narrowest street in the city – the alley of Mårten Trotzigs – where the width is as narrow as 90cm (anyone prone to claustrophobia should definitely restrain)

Because of the location of Sweden, Stockholm flights are affordable from all around Europe.  International trips also have interesting prices – a flight from New York to Stockholm can be obtained for $556. The Stockholm airport Bromma is the closest airport to Stockholm, and provides easy access to the center.

Hotels in Stockholm Sweden offer many different types of accommodation. A cheap B&B in the center is the Hostel Bed and Breakfast Stockholm Sweden located close to the Rådmansgatans U-station. Mixed bedrooms have rates at 340 SEK ($53). The Grand Hôtel is grandiose and very luxurious. Founded by a Frenchman, it opened in 1874, with 400 rooms, banquet and conference areas and restaurants. Rates start at 3 040 SEK ($479).

The islands in Stockholm make the cityscape very beautiful which is accentuated by three key elements.  The first is the sea with its refreshing qualities that favorably affect all life. The second are the trees, with their calming and relaxing  effect ,  cleaning and purifying the air,  and the final key element is the open space that is ever-present,  contributing  to a sense of well-being –  visitors can easily forget they’re in a thriving capital and not in a sea resort.