The city of Zagreb, capital of the Republic of Croatia, assumes a major role and acts as a crossroads for the Eastern European Communities.   It is strategically located on the Adriatic Sea, and shares borders with seven other countries making it a melting pot of interesting people and charming cultures. People are attracted to Croatia from all over Europe.

The Adriatic Sea has beautiful beaches with crystal clear blue water. The capital city itself is filled with life and yearly hosts interesting events, drawing many people from neighboring countries. Weather in Zagreb Croatia has a direct impact on this because of its light winters and agreeably fresh summers which welcome vacationers.

One example of a famous festivity that occurs in the city is the international animated film festival of Zagreb.  It is festival renowned around the world and great artists make the scene to display animated work that each year brings pleasant surprises to its innumerable visitors. Famed international popular music artists such as The Rolling Stones, Metallica, Massive Attack, Lady Gaga, Beyoncé, as well as Bob Dylan have all shown up in Zagreb to put on concerts. More than 20 theaters can be found in the city, creating an agreeable, musical atmosphere that is enjoyed by all. The prestigious Croatian National Theater, opened by the Emperor Franz Joseph I in 1895, provides an appealing sightseeing experience. 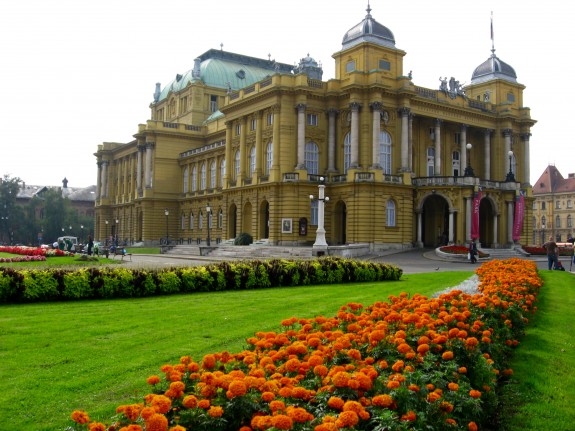 Another significant historical promenade is the Ban Jelacica Square, a spacious environment perfect for moments of rest and offering as well excellent shopping possibilities. If you plan on buying souvenirs, try neckties, as the very origin of neckties is Croatian –this explains why a large choice of style and fashion in neckties can be found here, making wonderful gifts.

Located on the hill Gornji Grad is Gradec, a core of historical monuments, parks, churches, and the Croatian Parliament. If you don’t wish to miss any sights and are hesitant because of the language barrier don’t be reluctant but head directly to Zagreb Croatia tourism offices who will courteously greet you in English. Moving around in the city is easy, as the public transportation system of buses and trams covers the whole city.

The Zagreb Airport gives easy options for access to this city from around the world, especially from Europe at very moderate prices. In summer, flights from London to Zagreb can be found at around £123 ($200).  Also keep an eye out for package prices as accommodation in Zagreb could end up costing much less than originally expected.

Zagreb Croatia hotels are very plentiful and you will not have to worry about where to spend a night. Budget hotels can be found within a short walking distance of the center and one such hotel is the Buzz Hotel with prices starting at £36 ($60).  Even the more luxurious hotels like the famous 5-star Regent Esplanade Zagreb have affordable rates that begin at £100 ($164) but  can go up to £1 347 (2 190) for the presidential suite.

If at first Zagreb Croatia map routes seem limited, be sure to take a closer look, as Croatia is a country filled with vacation opportunities.  Captivating city tours and amazing beaches are just two of the numerous national treasures that await you.

57 Replies to “Zagreb – Croatia, a Crossroads for Eastern Europe”