Switzerland is a unique country where the diverse cultures of surrounding countries have greatly influenced the country itself, with the official languages being German, French, Italian and Romansh. Zurich Switzerland travel will welcome you into a land of cleans streets, interesting traditions, and national specialties providing each visitor with a small taste of surrounding countries. Summer holidays 2012 are out there waiting for you in Switzerland.

Famous for staying neutral in wars by refusing to go against other countries, even being called cowards by some, they still produced an undeniably prosperous society — Switzerland has proven have been better off without wars.  Zurich is an amazingly clean city and the population goes to great lengths to keep it that way, even to the point of expecting pet owners to pick up the little messes their animals make on the streets or in parks. This might sound a little extreme, but it comes from the profound respect Swiss people have for their country, each considering the streets part of their home, and by keeping them meticulously clean, they honor their homeland.

As a general rule, life isn’t cheap here, although local products like chocolates can be bought for reasonable prices. Meat, on the other hand, and even going out to eat in restaurants, can be quite expensive. Salaries in the capital compensate this fact, and people are not poor, but travelers should prepare for relatively high expenses when visiting Switzerland.

The beauty of Zurich goes without question; the magnificent blue Lake Zurich that surrounds the city as well as the impressive mountain tops visible in the background, are two natural factors that enhance the city’s elegance. The Old Town of Zurich has many sights to visit, including the two most famous churches of Switzerland, the Grossmünster, a Romanesque styled edifice, and St. Peter Church with a remarkable tall clock tower whose face is the largest in the world.

Shopping is an important part of Zurich’s appeal; the Bahnhofstrasse is the main shopping street of Zurich, which is famous for having chic and exclusive shops.  It is ranked in the top 10 of the worlds most expensive and high-class avenues, with Prada, Chanel, and Dior merchandise exquisitely displayed, along with other name brands.  The Paradepatz square at the end of the street is the headquarters of important banks in Switzerland, UBS and the Credit Suisse Group.

Zurich hotels resemble everything else in that they are somewhat expensive. There are some ways to find Zurich Hotel deals for those who are willing to look, and also don’t object to staying outside the center of town. Luckily enough, Zurich Switzerland hotels are plentiful and can be found near the airport, or a little away from the center, for a less expensive price, with rates starting at 80 CHF ($88). 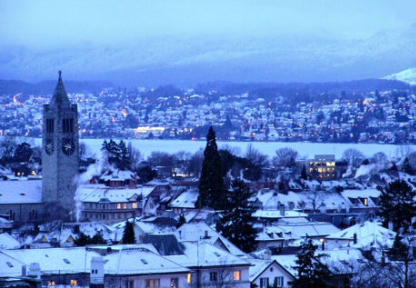 One Zurich cheap hotel is the Etap Hotel Zurich City West. Located 10 minutes away from the center, and close to bars and restaurants, it offers the best prices in Zurich which start at $89. The Alden Hotel Splugenschloss is Zurich’s most acclaimed five-star hotel, and proposes unforgettable nights in prestigious and majestic rooms with beautiful Swiss style, and close to Lake Zurich. Rates here begin at $589.

There are interesting attractions in Zurich, from sophisticated museums to lovely botanical gardens and intriguing Guild Houses. All these sites are easily accessible by public transportation. A trip to Zurich might require a little saving up before hand, but once there, travelers agree that every penny is well-spent in this clean, elegant, and truly fascinating city.

One Reply to “Famous for Watches, Chocolate, and Banks, Zurich – Switzerland”